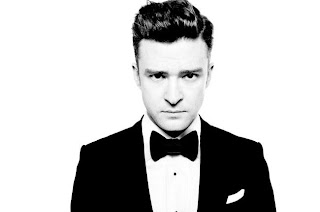 If you're a regular reader of Tuesday Morning 3 A.M., you probably have a pretty wide musical appetite. Which means you probably like some things that other people just can't believe you like.

This week's column is all about that, and about how you should never feel guilty for enjoying what you enjoy. It includes reviews of the new Justin Timberlake (above) and Mavericks albums, and since it's the end of March, it concludes with my First Quarter Report for 2013. But if nothing else, I hope to impress upon you that when it comes to music, there is no such thing as a guilty pleasure.

Read the column here, and head back to the blog to leave me a comment. Cheers!
Posted by Andre Salles at 4:57 PM No comments: