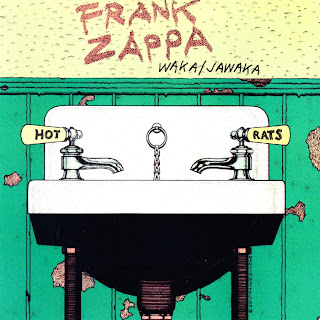 When that crazed fan pushed Frank Zappa off the stage of the Rainbow Theatre in London in December of 1971, he couldn’t have known the long-term effect his actions would have on the composer’s subsequent career.

That Zappa had a subsequent career is something of a miracle. He suffered severe head trauma, multiple fractures and injuries to his back, legs and neck. He spent the majority of the next year in a wheelchair, and one of his legs healed incorrectly, causing it to be longer than the other. (See the lyric in “Dancin’ Fool,” released in 1979.) His voice also dropped considerably, due to a crushed larynx.

It would be nine months before Zappa would return to live performance, and even then, he was limited – he still wore a leg brace and couldn’t stand for long periods of time. During those nine months, Zappa literally had nothing else to do but recover, and write.

And so he wrote. Zappa finally took the time to compose music for larger ensembles – not as large as the orchestra he worked with on 200 Motels, but much more vast than his usual Mothers lineups. And he took the opportunity to explore jazz in a way he never had, writing for a shifting, rotating group of musicians with at least one foot in that world. This would not be the arena-filling comedy rock of the past few years. This would be music he could write from bed and organize and conduct from a wheelchair.

The results are unlike anything Zappa had attempted before. Zappa’s two new 1972 albums, Waka/Jawaka and The Grand Wazoo, stand alone in his catalog, a pair of dense, jazzy, mostly instrumental works featuring some of the finest players he’d ever worked with. The Mothers had disbanded by the time Zappa was ready to record this material – only drummer Aynsley Dunbar and keyboardist Don Preston remained for these sessions. But Zappa pulled from jazz and the burgeoning jazz-rock fusion circles, and came up with multiple fascinating ensembles.

There are 16 musicians on Waka/Jawaka, and it’s the smaller of the two records in scope. It consists of two swinging pop songs and two extended instrumental jazz-rock jams. The front cover illustration features a sink with the words “hot” and “rats” written on the spigots, which have led some to consider this a sequel to one of Zappa’s most popular records. But while the improvisatory tone is the same, the sound of this record bears no resemblance to Hot Rats.

Opener “Big Swifty” is, in fact, clearly influenced by Miles Davis – his Bitches Brew came out in April of 1970, helping to ignite a darker outgrowth of fusion. “Big Swifty” follows this pattern – it’s 17 minutes long, takes up the entire first side, and aside from a few minutes of composition at the beginning and the end, it’s a Bitches Brew-style jam. George Duke’s electric piano echoes Herbie Hancock’s work with the same instrument, while Zappa trades licks on guitar with Sal Marquez on heavily echoed trumpet. Dunbar and a bassist named Erroneous keep everything from floating off into space.

The second side opens with its two most accessible numbers, the shorter tunes “Your Mouth” and “It Just Might Be a One-Shot Deal.” They both have very Zappa lyrics – “Your Mouth” is a blues piece about a man with a shotgun and a woman who won’t shut up, and “One-Shot Deal” is about a frog with a satchel – and tight melodies. Zappa himself doesn’t sing on these tunes, leaving the vocals to Marquez, Chris Peterson and Janet Ferguson. Tony Duran’s slide guitar in the latter song is a highlight.

The album concludes with the 11-minute title track, which points the way forward for many similar songs in the coming years. It’s a groove-rock jam, a full horn section giving way to solos by Zappa and Preston while Dunbar and Erroneous dance around Zappa’s fluid acoustic playing. “Waka/Jawaka” shows off Zappa’s gift for arranging horns, particularly in the final minutes. While some of the record is dark, the finale is like breaking sunshine.

Waka/Jawaka sets Zappa off on a path few could have envisioned him taking, but he proves to be a natural at it. While The Grand Wazoo is overall more effective (and more daring), the first of Zappa’s “wheelchair albums” is a fine effort, delivering what all the finest Zappa records do best: exceptional musicians playing exceptionally well.

Which version to buy: Definitely the 2013 Zappa/Universal remaster, based on the original 1972 analog master. The horns are crisp and clear, and the entire album sounds much better than it did on Ryko’s master in the 1990s.

Next week: The Grand Wazoo.
Posted by Andre Salles at 4:49 PM