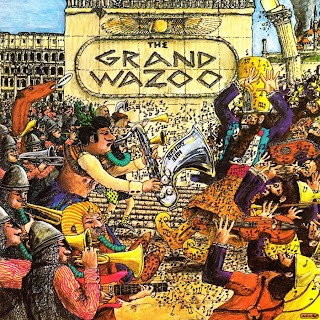 There are a lot of reasons to admire Frank Zappa as a composer, but here are three that sum up much of the acclaim:

Zappa wrote a ton of music, more than would seem humanly possible in the short amount of time he had. And he rarely relied on simple structures or progressions. More often than not, Zappa's music was intensely difficult to perform, and only the best musicians could keep up with both his prodigious output and his demand for accuracy and excellence.

The early 1970s were a particularly prolific time for Zappa, and he assembled some of his most talented ensembles to play his new music. That streak truly begins on The Grand Wazoo, the second of Zappa’s “wheelchair albums.” Released in December of 1972, this album builds upon the template established on Waka/Jawaka. Had he continued down this path, The Grand Wazoo would have been a fascinating signpost to the future.

As it is, this is merely the best of Zappa’s two mostly-instrumental jazz-rock works. There are 25 musicians on this album, and unlike its predecessor, it doesn’t rely on extended jams. (There are a few, but they aren’t the backbone of the album.) The Grand Wazoo is heavily structured music, with intricate arrangements – blocky horn charts, thick piano lines, and a virtual web of cascading melodies and countermelodies.

In some ways, this is orchestral music with jazz instruments. The opening title track stacks trumpets and trombones atop one another – it begins with a minute of groovy guitar playing, but as soon as the horns kick in, Zappa shows off his skill as an arranger. The brass lines weave in and around solos from trumpeter Sal Marquez and trombonist Bill Byers, with Zappa, bassist Erroneous and drummer Aynsley Dunbar providing the shifting backdrop. The song lasts 13 minutes, but it never slips into jam-band tedium.

“For Calvin (And His Next Two Hitch-Hikers)” is the one song with vocals, by Janet Neville-Ferguson and Sal Marquez, but it dispenses with relating the true-life tale of cover artist Cal Schenkel’s encounter with a pair of strangers, and slips into a surreal mass of bizarre tones. During this time, Zappa was also composing one of his masterpieces, “The Adventures of Greggery Peccary,” and portions of the “New Brown Clouds” section of that piece crop up here.

“For Calvin” is the album’s one moment of slightly dissonant oddness. From there, the record showcases some of Zappa’s most effervescent melodies. The second side of The Grand Wazoo practically erupts with joy. It purports to tell the story (written out in the liner notes) of an illusory replica of ancient Rome presided over by Cletus Awreetus-Awrightus, in which questions – people who do not like music – are marched into an arena and made to fight for their lives.

But this is all secondary, as are all of Zappa’s programmatic explanations. All you need to know is that the brief “Cletus Awreetus-Awrightus” is a complex, brassy delight, “Eat That Question” is a showpiece for pianist George Duke (and contains one of Zappa’s best jazzy riffs), and closer “Blessed Relief” is one of the few moments of pure beauty in the composer’s catalog. It feels like the theme to a 1970s television show, the muted trumpets playing a wistful melody. Zappa here was not concerned with anything but writing the prettiest song he could, and it would be a while before he tapped this particular skill again.

In fact, Zappa would never again immerse himself in jazz the way he did during his period of limited mobility in 1972. He ended up touring with these large ensembles, first with a massive group called the Grand Wazoo, and then with a smaller one called the Petit Wazoo. (Both were captured for posterity, and live albums were released after Zappa’s death.) But immediately following those tours, Zappa began following a different path, one that led him to his greatest commercial success, and he abandoned this musical trail. Waka/Jawaka and The Grand Wazoo are all that remain, and are often forgotten between the 1960s Mothers and the more popular sleaze-rock that followed. Both are little gems, and The Grand Wazoo is one of Zappa’s finest works. It is not to be missed.

Which version to buy: Once again, the Zappa family came through with the 2013 Zappa/Universal remaster. It uses the original 1972 analog mix, and sounds wonderful.

Next week: Over-Nite Sensation.
Posted by Andre Salles at 6:00 PM