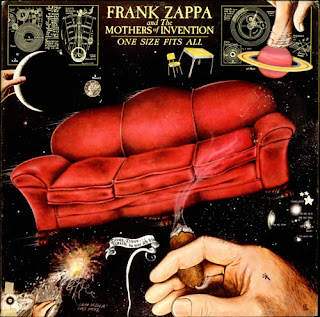 One Size Fits All marks the end of an era.

While the Captain Beefheart collaboration Bongo Fury is actually the last new album credited to the Mothers of Invention, One Size – released in June of 1975 – is truly the final bow of the band. Similarly, while most of the Roxy and Elsewhere band appears on Bongo Fury, this album is the last chance to hear them in all their dazzling glory.

It’s also the last time Zappa would explore this jazz-rock style. His later records would break cleanly between “serious” compositions and sleazy, guitar-heavy rock, and the next time he’d put together a horn-driven ensemble of this caliber would be for his final tour in 1988. One Size Fits All caps off a four-album streak of complex yet vastly popular work from this jazzy little orchestra, and that work is so indelible that many simply consider it Zappa’s style, all but disregarding the expansive multitude of genres he delved into.

In many ways, One Size Fits All is the counterpart to Roxy and Elsewhere, showcasing that extraordinary band in a studio setting. It’s the furthest thing from sterile, however. In fact, there’s enough freeform jamming on this album to almost qualify it as a live recording. But One Size also contains some of the most intricate material Zappa had yet written for this group, putting (in particular) bassist Tom Fowler, drummer Chester Thompson, keyboardist George Duke and mallet percussionist extraordinaire Ruth Underwood through their always-amazing paces.

As a last hurrah, then, One Size Fits All is a remarkably solid piece of work. It opens with “Inca Roads,” perhaps the most sophisticated piece Zappa wrote for this band. The basic tracks for this and “Florentine Pogen” were in fact recorded live as part of a television special (released on DVD as A Token of His Extreme), which makes it all the more impressive. It begins with a simple bass-and-vibes groove, but as soon as Napoleon Murphy Brock’s vocals come in, the complexity of the song becomes clear.

“Inca Roads” also contains the first instance of a Zappa technique called “xenochrony.” This involved lifting interesting parts of concert recordings – in this case, the long, languid guitar solo – and building new studio tracks around them. The guitar solo was recorded in 1974 in Helsinki, and transplanted whole onto this recording of “Inca Roads.” This technique created surprising new interplays between instruments recorded at different times. Zappa was fascinated by this as a form of composition, and would use it extensively throughout the rest of the 1970s.

The solo fits perfectly into “Inca Roads,” an eight-minute, constantly shifting story of UFO sightings (among other things). George Duke takes a superb synthesizer solo, and Ruth Underwood closes things out with some more of her jaw-dropping runs on the vibes. This song takes a few listens to truly appreciate, since it seems to begin in the middle and end abruptly, with no real structure in between. It’s a sign of Zappa’s particular genius that it segues into the straightforward rocker “Can’t Afford No Shoes,” a brief 2:38 of crunchy guitars and 4/4 beats.

The Zappa classic “Sofa” appears here in two nearly identical versions, one with vocals and one without. The song is oddly romantic, lush and full, with synth bass from Duke and a glorious harmony guitar refrain at the end. (This album contains a lot of synthesizer, a sign of things to come.) The instrumental take is first, at track three, with the vocal version (sung in German) closing out the album. It’s a peculiar yet lovely sentiment to end with: “I am all days and nights, I am here, and you are my sofa.”

“Po-Jama People” is almost a straight-ahead boogie, showing off the Thompson-Fowler-Duke-Zappa powerhouse. It’s defiantly simple, darting back and forth between two chords while Duke and Zappa wail away for seven minutes. The lyrics rail against those who sleepwalk through life, a common Zappa target: “The Po-Jama People are boring me to pieces… Wrap ‘em up, roll ‘em out, get ‘em out of my way…” “San Ber’Dino” is similar, a rollicking tribute to the San Bernardino, California area with some sharp solos and fun jamming. (And Captain Beefheart on harmonica.)

“Florentine Pogen” is another well-regarded piece, a slower crawl that pauses every few seconds for another musical detour. It has a singable melody (which Brock sells beautifully), but around that, the song is maddeningly complicated. It also contains another instance of the “Louie Louie” lick, as well as the greasy “Pound for a Brown” bass line, both showing where Zappa’s sympathies lie in this tale of a rich daughter and her proclivities.

“Pogen” isn’t an attack, but “Andy” certainly is, and its target remains uncertain. Brock spends the first few minutes of the song asking the intended listener “Is there anything good inside of you, if there is I really want to know,” but ends up talking about actor Andy Devine and his “thong rind,” reportedly the residue left after wearing thong sandals for years. It’s surreal, yet the anger in it feels real. The song itself is another complicated stunner. Its main melody is devilishly difficult, and yet will stick in your head, and the start-stop herky-jerky rhythms show off just how good Thompson and Fowler are.

Which just leaves “Evelyn, a Modified Dog,” a quick piano ditty that serves as the fourth poodle reference in as many albums. But this one is simply loaded with conceptual continuity clues, most of them leading back to the piano people from Lumpy Gravy. Evelyn, hearing noises from within a Steinway piano, ponders “the significance of short-person behavior in pedal-depressed pan-chromatic resonance and other highly ambient domains,” and coming to a particularly apt conclusion: “Arf, she said.” This same “arf” can be seen on the inner spines of all of the 2012 reissues from Zappa Records.

Listening to One Size Fits All is a joyous experience, but tinged with the sad realization that this is the last time the Roxy band will be featured on a Zappa record. He could not have asked for a more talented and in-sync group of players to bring his foray into jazz-rock to life. With his early-‘70s albums, Zappa was playing the long game, writing popular music to bring in an audience that would stay for the rest of his life. This tactic worked smashingly well, allowing him to alternate between crowd-pleasers like Sheik Yerbouti and more taxing works like The Perfect Stranger in later years.

And while this band would dissipate over the coming years, Zappa would immediately begin assembling his late-‘70s band, including Terry Bozzio, Patrick O’Hearn, Adrian Belew and the Brecker Brothers. So while this album does mark the closing of one chapter, the next one begins shortly. One Size Fits All is a fine farewell to the Roxy band, and to this particular jazz-rock style. Zappa would score scattered hits in later years (including his only top 20 single in 1982), but would not release four albums in a row with this level of popularity and acclaim again. His work from Over-Nite Sensation through One Size Fits All remains among his most cherished, and for very good reason.

Which version to buy: No doubt, the 2012 reissue from Zappa/Universal. Remastered from the original analog mixes by Bob Ludwig, it’s the definitive One Size Fits All on CD.

Next week: Bongo Fury.
Posted by Andre Salles at 3:24 PM