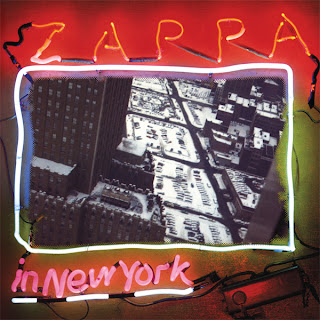 Frank Zappa’s fourth proper live album is a treat, a dazzling return to form after the dismal Zoot Allures and the true debut of his magnificent late ‘70s band. But it almost didn’t happen – at least, not in the way we’ve come to know it. That’s why, in order to talk about Zappa in New York, one first needs to talk about the great lost album known as Lather.

In 1977, Zappa was in the throes of a legal battle with his former manager, Herb Cohen. Zappa had sued Cohen for allegedly taking too much money from the coffers of DiscReet Records, the label the two of them owned. In October of 1976, Zappa bypassed DiscReet and released Zoot Allures on Warner Bros., the company that had been distributing Zappa’s albums for years. Cohen then sued Zappa for not complying with his DiscReet contract.

Despite this falling out, Zappa was still signed to DiscReet (and hence to Warner Bros.), and still owed four more albums. In an unprecedented move, Zappa delivered Lather, a four-record box set that he hoped would cure his obligations all at once. This, naturally, did not sit well with Warner, but since no one had ever tried this tactic before, there were no rules in place to prevent it. The record company suits were further displeased by the content of Lather – the complexities of the present-day composer, submerged for most of the ‘70s, were finally on full view again here.

Warner Bros. refused to release Lather as a four-record set. They also prevented Zappa from releasing it through Phonogram Records, claiming ownership of the material despite their intention to mothball it. Zappa responded by playing a test pressing of Lather over the air on California radio station KROQ, which further angered Warner Bros. In the end, Zappa was forced to cut Lather into four separate albums, which Warner agreed to release, thus fulfilling Zappa’s contract.

Though reluctant to do so, Zappa made the cuts, and even actively participated in the preparation of the first of those reconfigured albums, Zappa in New York. This double-record set documents a series of shows performed at the Palladium in New York in December of 1976, though much of the material was heavily overdubbed, as it was intended to sit beside studio recordings on Lather.

But Warner Bros. did not stop interfering. DiscReet issued Zappa in New York with Zappa’s intended track listing in 1977, but Warner Bros. quickly put a stop to it before it could be widely distributed. The problem was a track called “Punky’s Whips,” which poked fun at drummer Terry Bozzio for his infatuation with Punky Meadows, guitarist for a then-popular band called Angel. The song is fairly graphic, and Warner objected, cutting it from the “official” release of Zappa in New York in March of 1978. They also edited a song called “Titties and Beer,” which is a lot funnier than it sounds.

That was the last straw for Zappa, who left the artwork and promotion of the other three Lather albums up to the record company suits. When full rights to the material were returned to him, Zappa reissued Zappa in New York, restoring all the originally intended content and adding four bonus tracks. This is the version we know today, the one reissued by the Zappa family in 2012.

And it’s terrific. Zappa’s late ‘70s band is in full force here, including guitarist and vocalist Ray White, bassist Patrick O’Hearn, keyboardist Eddie Jobson, percussionists Dave Samuels and Ruth Underwood, and a dream horn section including the Brecker Brothers (Randy and Mike), saxophonist Donnie Cuber (who went on to join the J. Geils Band), and saxophonist Lou Marini and trombonist Tom Malone, both members of the Saturday Night Live band at the time.

But the star is drummer Terry Bozzio, breaking out of his deliberately constrained performance on Zoot Allures and emerging as a dynamic live presence. Bozzio gets to shine as a lead vocalist on both “Titties and Beer” and “Punky’s Whips,” and he grabs the spotlight on the impossible drum solo “The Black Page #1.” With Bozzio providing the bedrock, this band jumps nimbly from bluesy rock to jazzy funk to insanely complicated instrumental pieces with ease.

Only two tracks (six on the extended edition) are renditions of previously released songs. The rest is new material developed for this band, and their sheer joy at performing this stuff is palpable. The album opens with “Titties and Beer,” Zappa’s attempt to dumb down Stravinsky’s L’Histoire du Soldat (A Soldier’s Tale) for the masses. Over a raucous repetitive saxophone riff, Zappa plays the part of a biker who faces off with the devil, played with gusto by Bozzio. In concert, Bozzio would don an uncomfortable-looking devil mask for this tune.

“Titties and Beer” is crass, but it’s making a wider point – anything can be delivered to the masses in a palpable way. As in the Stravinsky piece, a deal with the devil is made, but in this case, the devil upsets Zappa’s single-minded character by eating his “big-titted” girlfriend and his beer. The devil offers them back in exchange for Zappa’s soul, and when he willingly agrees, it takes the devil by surprise, leaving him open for a sucker punch. It’s presented in the most juvenile way imaginable, but it’s fun.

“Titties and Beer” ably displays the difference between this album and Zoot Allures. Where its predecessor was dark, claustrophobic and ugly, Zappa in New York is vibrant, grinning at you the entire time it plays. The lyrics here continue Zappa’s obsessions with sex, much like his early ‘70s material, but performed the way they are here, they seem more harmless than puerile. But make no mistake, there are some lyrics on here that will turn away the squeamish. Even the prettiest of the instrumentals is called “I Promise Not to Come in Your Mouth.”

The most egregious is “Honey, Don’t You Want a Man Like Me,” which Warner Bros. apparently had no issue with. It details a bad date between two shallow people, doling out disdain on both of them – her favorite group is Helen Reddy, singer of “I Am Woman,” while he is the type of guy who thinks substituting “puck” for a similar-sounding obscenity is hilarious. At the end of the date, she refuses to kiss him, which provokes a series of major obscenities and a slammed door. It ends with a dead car battery and oral sex, and with Zappa’s patented derision, equally heaped on both parties.

Similarly discomfiting is “The Illinois Enema Bandit,” a lengthy blues piece that takes the true-life story of serial sexual assaulter Michael Kenyon as its source. For roughly 10 years, Kenyon terrorized students at the University of Illinois, administering unwanted enemas. There’s something funny here, but Zappa just goes straight for the crass – Ray White sings “He just be pumpin’ every one of ‘em up with the bag fulla Illinois Enema Bandit juice,” and “He’s looking for some rustic co-ed rump that he just might wanna pump…” Zappa does play with blues conventions near the end, and makes a grand reference to “It Can’t Happen Here,” off of Freak Out. But unless you think forced enemas are inherently funny, this one may not (ahem) sit well with you.

But what of “Punky’s Whips,” the song Warner Bros. actually cut? Truth be told, it’s a funny and maddeningly complex piece of work. Stretching to nearly 11 minutes, the song delves fully into Bozzio’s infatuation with Meadows’ publicity photo, pausing to riff on a line from Angel’s PR materials that called Meadows “more fluid than Jeff Beck.” The song ends with Bozzio adamantly proclaiming that he is not gay, but is “just a little fond of chiffon in a wrist array,” before hoping Punky can “yank my crank all night long.”

Warner Bros. was concerned about Meadows’ reaction, but he was a good sport, even appearing on stage with Zappa in later years. And despite the finely crafted music, it’s clear from Bozzio’s throaty delivery that this song is not serious. In fact, all these songs are delivered this way – special guest Don Pardo, the voice of Saturday Night Live, even drops by to introduce both “Punky’s Whips” and “The Illinois Enema Bandit,” further encouragement not to take them as anything more than larks.

Speaking of Pardo, he pops up one final time, brilliantly hamming up the final verse of “I’m the Slime.” This was one of Zappa’s bonus tracks (along with the awesome instrumental take on “Cruising for Burgers” and the renditions of “Pound for a Brown” and “The Torture Never Stops”), and now it seems integral to the record. Pardo clearly has such fun shouting this out. “You will obey me while I lead you and eat the garbage that I feed you!” The irony of using a man best known for his TV work to criticize TV is not lost, either.

Most of the album’s second disc is devoted to sheer musicianship. The band makes an unbelievably complex piece like “Manx Needs Women” seem effortless, and they run through all three versions of the inhuman “The Black Page” with grace. “The Black Page” got its name when Bozzio saw the sheet music – there were so many notes, he said, that it looked like a black page. Every note and every drum hit is written out and very precise. It’s an extremely difficult piece to play.

And once again, Zappa shows his equal commitment to precision and improvisation by giving the fourth side of the album over to “The Purple Lagoon/Approximate,” a 17-minute jam with a complex head and some wild solos. Zappa’s guitar solo was overdubbed in the studio, but the fiery contributions of (in order) Mike Brecker, Ronnie Cuber, Patrick O’Hearn and Randy Brecker were all captured live. It’s a testament to the skill of this particular band.

Zappa in New York is an embarrassment of riches. (We haven’t even mentioned the superb renditions of “Big Leg Emma” and “Sofa,” or the way “The Torture Never Stops” comes alive here, easily surpassing the studio take.) Though most of this material was included on Lather, which itself saw release after Zappa’s death, hearing it in this context is a treat. In its extended form, this is more than 100 minutes of terrific music played by terrific musicians. What more could you ask for?

Which version to buy: If you’re looking for a CD, it doesn’t matter. The only version available is the extended one, with the four bonus tracks (which you want), and this album was not remastered for its 2012 re-release. It sounds great regardless.

Next week: More Lather goods with Studio Tan.
Posted by Andre Salles at 9:07 AM