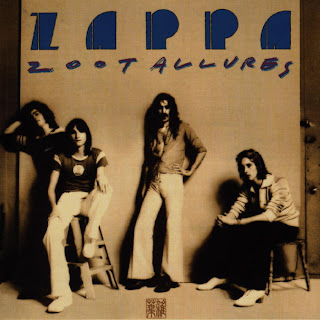 If Bongo Fury was a step down from Zappa’s early-‘70s work, then Zoot Allures, released almost one year later, was a sharp plummet. The album is an absolute mess, one of the worst collections released under Zappa’s name, and its thrown-together feel mirrors the chaotic state of Zappa’s musical career in 1976.

The composer’s previous four albums were released on DiscReet, a label owned by Zappa and his manager Herb Cohen. But in 1976, that relationship evaporated. Zappa sued Cohen for taking more money than he was owed, and Cohen counter-sued Zappa. It was a dark time, and in response, Zappa created a dark album, which he delivered directly to Warner Bros. records, the label that had been distributing DiscReet records for years.

It’s difficult to tell just what his intention was in creating Zoot Allures. It’s such a hodgepodge that its cover doesn’t even represent it – the photo shows Zappa’s pared-down 1976 touring band, but neither bassist Patrick O’Hearn nor keyboardist Eddie Jobson appear on the album. Instead, the nine tracks hail from various sources and sessions, with various players. Drummer Terry Bozzio is the only constant – this is his true Zappa debut – and 10 other musicians, six of whom had never played on a Zappa album before, cycle in and out.

Zoot Allures is Zappa’s idea of a stripped-down rock record. It brings his thick, angry guitar tone to the fore – it sometimes drowns out other instruments – and includes some of Zappa’s simplest, most primal songs. The production is dark and vicious, Zappa taking most of the lead vocals and using a close-mic technique that allows him to speak-sing most of the lyrics. The sound is claustrophobic and sinister, clinical and off-putting.

The songs are also repetitive slogs, particularly the six studio pieces. While opener “Wind Up Workin’ in a Gas Station” provides a moment of hope, with its slippery time shifts and high-pitched vocals from Davey Moire, the remaining pieces are generally far simpler than anything Zappa had yet done. (Including Ruben and the Jets.) Zappa forgoes the use of a bassist on most of these songs, preferring synth bass tones, and on songs like “Miss Pinky” and “Wonderful Wino,” he delivers single-minded rock riffs and thumps them into submission.

As if that were not enough to repel listeners of his early ‘70s work, Zoot Allures marks the point at which Zappa’s curmudgeonly humor ossifies into ugliness. Perhaps because the sound itself isn’t any fun, Zappa’s lyrics this time slip from observational snarkiness to unfiltered bile.

“Find Her Finer” posits that men should pretend to be stupid in order to bed women. “Wind Up Workin’” seems to be a critique of the educational system, but ends up just calling service workers dumb. “Wonderful Wino” is about how awful homeless people – homeless people – are, while “Disco Boy” is the tale of a ‘70s disco dancer who can’t attract women, so he goes home and masturbates. The repeated “you never go doody that’s what you think” is a clear indication of how far from the social criticism of the ‘60s albums this material is.

So the album is messy and stupid and offensive and careless, but it’s also impossible to dismiss outright. In between the venom are three guitar instrumentals, and two of them – “Black Napkins” and the title track – were chosen by Zappa as “signature pieces.” He considered them trademarks, indicative of his unique style, and it’s hard to argue. “Black Napkins,” recorded live in Japan in February of 1976, is a piercing blues with a sharp melody and delightful backing vocals by Roy Estrada and Napoleon Murphy Brock. When Zappa flies off into his solo, it’s extraordinary. His combustible style meshes with the smooth backing, particularly Bozzio’s drumming.

And “Zoot Allures” is fantastic, a beautiful melody sculpted from long sustains and feedback. It’s another of Zappa’s rare moments of unabashed beauty, with accents from Ruth Underwood on marimba and Lu Ann Neil on harp, and some sublime playing from the composer. In comparison, the third instrumental, “Friendly Little Finger,” can’t stand up. But it is another example of xenochrony – the solo was recorded live in 1973, and the jam around it, with Zappa on bass, Bozzio on drums and Underwood on percussion, was created two years later. It’s abrasive, but it works.

Zoot Allures also contains one of Zappa’s most enduring songs, “The Torture Never Stops.” A nearly 10-minute crawl that describes an evil prince’s dungeon of pain in grisly detail, “Torture” quickly became a live staple, played on every subsequent tour. It follows “Black Napkins,” so it’s clear that its square version of the blues is on purpose. Zappa plays all the instruments, except for Bozzio’s drums, and for the endless female screams overlaid atop the final five minutes. Zappa bills himself here as “director of recreational activities,” but there’s nothing recreational about this song. It’s dark and foreboding, Zappa’s electric piano creating a fine atmosphere.

“Torture” is one of two songs, along with sex toy anthem “Ms. Pinky,” that later appeared in Zappa’s ungodly vulgar musical Thing-Fish. The lyrics to both songs make more sense when placed in the Thing-Fish context, and Zappa’s reuse of the original recordings for that project further developed his idea of conceptual continuity. Everything is tied together, for no other reason than that it is tied together.

The downside of this is an inability to simply chuck Zoot Allures in the bin. It’s an ugly, repugnant little record, difficult to reconcile with the joyous and complex music that came before (and, blessedly, after). It still contains hints of the composer’s genius, and some of his most blistering guitar playing. But there isn’t enough here to recommend it.

Which version to buy: The 1995 Ryko master of Zoot Allures is appalling. Boxed in, echoey, full of digital reverb, and with a poor edit at the beginning of “Disco Boy.” Thankfully, the 2012 Zappa/Universal remaster corrects all of these problems, and sounds splendid. If you must buy Zoot Allures, buy that version.

Next week: My New York trip was delayed a week, and so now I am obsessed with the idea of reviewing Zappa in New York while actually in that state. Look for it on Monday, hopefully.